in Battery and Chargers - on 06:32 - 1 comment
Looking for an efficient USB charger that can operate from a 12V car battery? This unit functions at up to 89% efficiency and can charge USB devices at currents up to 525mA. Best of all, it won’t flatten the battery if it's left permanently connected, as long as you remember to unplug the USB device. There are lots of USB chargers on the market but this device has two stand-out features: high efficiency and low standby current. In fact, its standby current is just 160µA, a figure that’s well below the self-discharge current of most lead-acid batteries. This means that you can leave the device permanently connected and it will not cause that battery to go flat (or at least, not much faster than it would of its own accord).
Picture of the project: 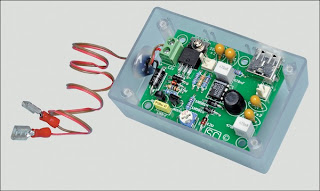 Why is this useful? Well, in September 2009’s “Ask SILICON CHIP” section, D. E. of Ainslie, ACT asked if it was possible to connect a 12V-to-5V USB charger directly to the battery on a motorbike. His reason for wanting to do this is that doing anything else might void the warranty. Our reply was that it is possible but that it would need to have a quiescent current (IQ) of less than 1mA to avoid draining the battery between uses. While USB car chargers are cheap and plentiful, finding one with a low enough quiescent current for permanent battery attachment is difficult. Even those marketed as “low idle power” devices don’t specify how much current they draw on standby. 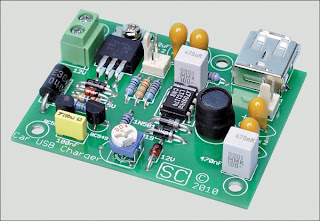 Low-Power Car/Bike USB Charger Circuit
We tested a regular charger and found that it consumed 13mA with no load. Like many others, it has an integrated power LED and that would contribute significantly to the standby current consumption. However, since the cigarette lighter socket is only powered when the engine is running, there is no real reason for the designers of these car supplies to keep the quiescent current low. Cigarette lighter plugs are also pretty lousy DC connectors. They often don’t fit well and can easily fall out. With this project, you can use whatever type of connector is most convenient. In many cases, this will mean input wires terminated in spade or eyelet lugs.

Low-Power Car/Bike USB Charger Circuit Diagram
While this may seem like a very specific application, there are many other uses for a low-quiescent current 12V DC to 5V DC converter. For example, remote monitoring stations often run from a 12V SLA battery topped up by a solar panel. These stations invariably contain a microcontroller and other circuitry which needs a 3.3V-5V supply. The current consumption in these devices will be low most of the time but occasionally the microcontroller will wake up and activate a radio module or other circuitry which can draw more current. This charger can deliver that current – up to 500mA – while still being miserly with battery power when the load is light. In addition, because its efficiency is high (up to 89%), hardly any battery power is wasted even when the load is drawing 500mA.
Parts layout: 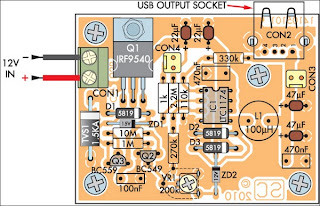 Parts Layout Of Low-Power Car/Bike USB Charger
What is quiescent current?
So what exactly is quiescent (or standby) current? This term often comes up in IC data sheets. Its simple meaning is “idle current”, although when talking about regulators, it sometimes refers to the current consumed by the device itself, rather than by what it is supplying. In most fixed regulators, this is the same as the “ground pin current”. There are typically two current flows in a regulator – from the input to the output and from the input to ground. The ground pin current is the power consumed by the regulator itself.
Source: Silicon Chip
Author: Nicholas Vinen
Copyright: Silicon chip Electronics Magazine
Tweet

This unit is very useful tool to interface load cell as an input to the Indicators, controllers, PLC having industry standard analog inputs: current or Voltage.